Fred Saigh (1905–1999) was born in Springfield, IL. to Lebanese immigrants who owned a chain of grocery stores. The oldest of five children, Fred grew up in Kewanee, IL, and attended Bradley University in Peoria. He loved sports and was an excellent student, graduating from the law school of Northwestern University in 1926, at the age of 21.

From an early age, Fred believed in the virtues of hard work, determination and accepting responsibility. His commitment to hard work and determination led to his rapid rise to success as a tax and corporate attorney. In 1946, after months of study and planning, Fred was able to purchase two architecturally notable office buildings: the Railway Exchange Building and the Syndicate Trust Building. The purchase of these buildings became national news and established Fred as a visionary in the St. Louis community. In the late 1940s, Fred truly became part of St. Louis history, when he and Robert Hannegan, Postmaster General and Democratic party chairman, purchased the St. Louis Cardinals from Sam Breadon. Fred became sole owner of the Cardinals in 1949, when Hannegan’s health failed, and Fred bought out his partner’s share. Knowing little about the business of baseball, he was a quick study and worked hard to learn as much as he could, as quickly as he could about America’s favorite pastime. Fred was considered a generous and fair owner by players as well as by fans. Early on, he gave many players — including rookie players — substantial salary raises, above and beyond major league salary guidelines. In his book The Spirit of St. Louis, Peter Golenbock recounts one famous incident from the spring of 1952: 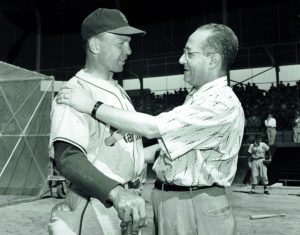 “When [Stan] Musial came to spring training in the spring of ’52 Saigh put a blank contract in front of him and told Stan to fill in any amount he felt was fair. The transaction said a great deal about both Musial and Saigh. When Musial wrote in a figure, Saigh was pleased for his star player.”  Golenbock continues, quoting Stan Musial, “I was surprised when he did it. I put in $85,000. I jumped from $50,000 to that number.” Golenbock quotes Fred saying: “I felt Stan was a good, honest guy. We let him know how much the Cardinals were making, and he set down a good figure. With the figures [salaries] floating around today, that would have been foolhardy.”

In 1953, Saigh sold the team to Anheuser-Busch for three-quarters of a million dollars less than he would have received from out-of-state interests. Saigh was adamant that the Cardinals stay in St. Louis, and his act ensured that the city kept its team.

Again, from The Spirit of St. Louis, Peter Golenbock postulates, “It was because of Fred Saigh that St. Louis fans got to see Bob Gibson, Tim McCarver, Lou Brock, Ozzie Smith, and Mark McGwire. If Saigh had been like Walter O’Malley, Horace Stoneham, Lou Perini, or Arnold Johnson, St. Louis may well be an American League city today, with the Browns the city’s darlings and not the Cardinals. If justice were to be served, the Cardinals should erect a statue of Saigh the same way they put up one for Stan Musial.” 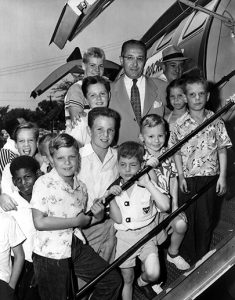 Saigh remained devoted to the St. Louis community throughout his lifetime. In addition to large grants that he gave to hospitals, universities and cultural institutions, he helped individuals in a variety of ways. He helped people known to him and those unknown to him — people he just happened to encounter. He put young students through college, paid mortgages so no one would lose a home, bought cars for single mothers, and paid doctors for medical procedures. He kept many dentists busy putting braces on children, and was always happy to see school children receive books. During his lifetime, he made certain there would never be a name recognition or detailed disclosure associated with his gifts. Through the years Fred had many office visits from those he helped, and it was touching to hear them share how their lives were changed because someone cared enough to help them. Fred spent the last ten years of his life planning the details for the creation of The Saigh Foundation. Through the foundation, he wanted to continue to enhance the quality of life for children and youth in the St. Louis metropolitan community by supporting educational and health-related charitable institutions and organizations.

Since his death, the foundation grants approximately $3 million per year to nonprofit institutions and organizations in the St. Louis area.

Founder, Executive Director and Co-Trustee from 2000 to 2019

JoAnn started as Fred Saigh’s administrative assistant and, in time, became his business partner and devoted friend. She remained with Fred for 44 years. Together they planned the formation of a private foundation to ensure his legacy of giving to the children of St. Louis. JoAnn never left a site visit or a meeting with a potential grant recipient without paying tribute to Fred and sharing his philosophy: “Fred was a unique, kind, and caring man and the results of his generosity will continue forever. What a world it would be if everyone could have a Fred Saigh in their lives. He was a rare person who did not care about race or religion or position in life…he knew that sometimes people just needed a little help and he was happy to be there for them, asking nothing in return.”

Mary worked in the healthcare field for 20 years as an RN specializing in geriatric and psychiatric nursing. She provided care for Fred Saigh’s sister, Rose, before joining the Saigh Foundation in 2004 to assist JoAnn Hejna in the administration of the foundation. Mary feels privileged to have known Fred Saigh during the last year of his life and can attest to his kindness, generosity, and sense of humor. Mary was instrumental in the grantmaking process and relationship management for the foundation. JoAnn and Mary were known for being accessible, compassionate and congenial. They understood and appreciated the impact so many organizations were making in our community.